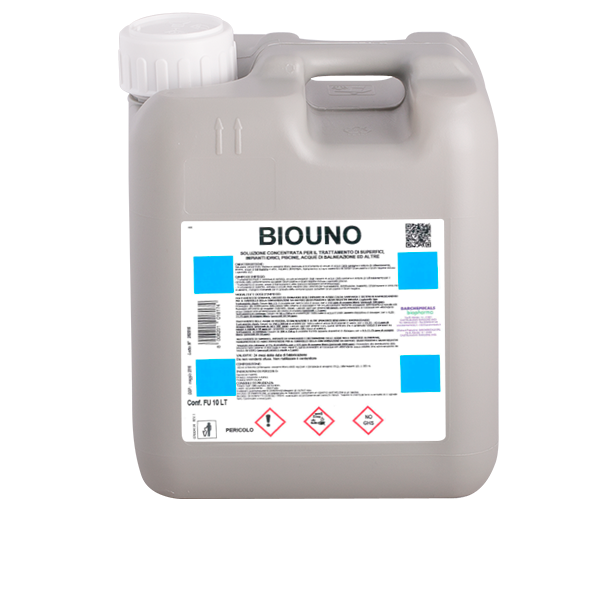 BIUNO is specifically designed for the treatment of thermal waters, as it does not determine alterations of its beneficial properties and contains no halogen derivatives such as Chlorine, Bromine etc.

BIOUNO is, furthermore, suitable for the prevention of contamination from Legionella spp. in domestic water circuits.

BIOUNO contains active components and stabilisers included in the provisional attachment, one of the biocide directive for use in the water.

BIOUNO owes its anti-bacterial action to the release of new oxygen when diluted in lukewarm water; the release of oxygen interferes with the sulphuric groups and disulphide bridges that make up the bacterial membrane determining its lysis.

The BIOUNO action is completed with the interference on the respiratory chain of the prokaryotes, due to the oxidisation of the sulphur loci.
In thermal tanks, the use of BIOUNO is synergised by the use of the BIOTRE product which, thanks to its very high redox potential, wholly oxidises the organic substance found in the tanks which could disempower the BP-BIOUNO effect.